We have left India behind after three and a half months, and are now heading to Hong Kong, where humanity seems to be reaching skyward, box by box by box.

Accommodation has proven difficult, even with the internet, it has taken three attempts to obtain a place to stay – Hong Kong is like Bethlehem around the end of the tax year. We arrive early in the morning, the kids too excited to sleep. We have a three bedroom serviced apartment for the next five nights in Sham Shui Po (Shamshuipo) on the north west part of Kowloon Peninsula. It is several stops away from the main hubbub of Kowloon centre, but is better than a guesthouse or a hotel. We all have bedroom each, and we can make tea for the first time in three and a half months – this is when you know you are English, this is when you know when you are on death row having your last supper and you have ordered your food, mine would be chicken (Makanwalla) curry; not so British you may think, but often gets voted Britain’s favourite dish! “…And I’ll have nice bottle of wine, and oh, a nice cup of tea, one sugar and milk thanks!”I can still remember that cup of tea now, the wife and I are looking at each other like Adam and Eve in the Garden of Eden after their first sip of nectar, prior to any apples. We have a similar experience with brie and French baguette from M&S in a park latter in the week, this is food sex, and we don’t care who’s dogging along.

It is also an invigorating place to stay as all the signage is Chinese, could be Manderin or Cantonese, we have absolutely no idea. Only the young appear to speak any English, so it makes shopping quite invigorating, to be in modernity, especially compared to a few days before in Southern India, but not be able to communicate effectively with your fellow human is very exciting, a lot of pointing occurs. The local shops and centre is teeming with people, and with the high rises everywhere it feels like the start of Blade runner. I assign the boy the daily job of getting us off at the correct underground station, as only he appears to understand the Chinese announcement.

We are on the 26th floor, and our apartment overlooks a park under a roadway and further in the not too distant, a container port. It is fascinating to watch the containers being moved around and guess what maybe in them, it also reminds me we are all quite insignificant in the world, but I’m too fascinated with dinky oceanic cargo to have an existential wrestle with myself.

The apartment allows us to make our own breakfasts, again this is the first time we have done this for three and a half months. It may appear like opulent luxury to have breakfast out every day, but the independence and freedom and somewhat meditative routine is a novelty. It is mad to think we have not made our own waking meal for such a long time, but there is a comfort in being in charge of your own epicurean destiny – honest!

We do lots of sightseeing. Criss-crossing between Kowloon and Hong Kong Island on the Star Ferries is difficult to tire of. We catch the funicular railway to the top of Victoria Park to get a greater perspective over the Chinese territory. We get chatting to a fascinating photographer called Lee Fook Chee, that has his original photos spanning over fifty years, the same shot, and if you ever want to see what progress looks like, check out the rudimentary tower blocks compared to the skyscrapers now. We buy before and after skyline photos, the before is in monochrome. I remember an art teacher in one school I used to work at, showing a black and white photo to a very weak class of Y8’s and him being bemused that none of the pupils were sure if the world only existed in black and white before colour film came along – the entire class! Cognitive conflict displaces concrete preparation sometimes!

The science and space museums are brilliant for kids, and I would highly recommend them if you have plenty of time in Hong Kong. It was far better than Disneyland and much, much, cheaper. Disneyland had not been opened long when we were there, and it had the feel of only being half finished. I have to hold my hands up to morphing into competitive dad inside the Buzz Lightyear Astro Blasters, I wanted to beat the boy because before we came away he spent an unhealthy amount of time playing Playstation games, one of these was aShoot-um-up. I wanted to show him that the inordinate amount of time was partly wasted, and there are better activities to pursue, this is how I justified it when I beat his score, a twelve year old, but in computer game years he was twenty-eight! Another factor may have also been the fact that when I occasionally played against him back home I had not beat him at any game for five years, the last time I beat him he was eight! I get told off by the wife for not letting him win; but she ignores me when I remind her he does not let me win any computer games. To be fair in moments of extreme benevolence he has tried, like the time he was York City (the lowest ranked team), and I was Barcelona, but I still managed to allow the ‘Minstered City’ to be victorious!

There appears to be only us and a coach full of people in the park that day. We don’t have to queue for anything, and by mid-afternoon we have been on the few exciting attractions several times, the best by far has been the musical shows. I have let the boy win on Astro Blasters the third time round, it appears to have no effect on his self-esteem whatsoever; a resigned order is restored in the universe. It is getting dark and we have stayed around for the firework finale. I’m more intrigued by the fact they have promised us snow, it is 18C, so I’m fascinated how they will achieve this, I have images of giant show blasting machines shooting blankets of snowflakes into the sky. The snow is bubbles form several bubble machines. It sums up a quite disappointing experience. The kids have enjoyed it, in my journal it says they had a magical time – but I’m uncertain now if I was being sarcastic! They had a better time in the museums, and the cutting and sticking the girl has done in a shopping centre the day before, at least they have been to a Disneyland/World now and can cross it off their bucket list, and are unlikely to want to go to any of the bigger ones, so that’s a bonus…. Bloody bubbles, cheeky Goofy bastards! 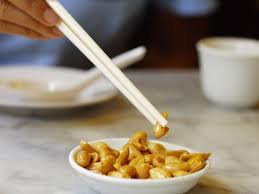 We have endeavoured with chopsticks when eating out all week. The wife gives up, followed shortly by me, but the kids have persevered continually. The boy is very good and he has reached local standards of dexterity. We decide at the last meal to have a competition, and slippery peanuts in a satay dish are chosen as the ultimate challenge. It is best of five and the girl wins 4-3, the boy has been over-confident, she cannot hide her delight, it is a giant killing result. He demands a rematch, but she is quite wisely refusing, she remains house champion, possibly forever. I ask her if she could not have let him win, that’s what I’m supposed to do, she looks at me like I’m about to be carted off in a yellow van with square wheels and a back-zipping suit.

It is now mid-December and Hong Kong has been a great experience and along with Mumbai has helped us acclimatise to life back in the developed world as we head out to Auckland to stay with close friends, in the next chapter of our travels.

Next time: Christmas in the sun.

I have to do that horrible thing a lot of us have to endure – work!, so I will only be able to put the blog out every three weeks, unless I win the lottery, but that is very unlikely, as I don’t buy a ticket.

I write books. You can buy any of them at very reasonable prices here: http://www.amazon.co.uk/s/ref=nb_sb_noss_1?url=search-alias%3Daps&field-keywords=ian+m+pindar